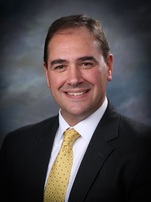 Adam practices family law, but has substantial experience with real estate and general civil litigation. He has litigated cases in many of Ohio’s courts of common pleas, in many of Ohio’s appellate-level district courts, and in both federal district courts located in Ohio. Before joining The Fogelman Law Firm, he worked in the litigation department at one of the area’s larger law firms.

In his community, Adam volunteered for 7 years with a local township’s zoning commission (serving as both a Chair  and Vice-Chair during his time with the commission ), has volunteered with a local township’s Development Committee, and has volunteered with the Ashland Animal Rescue Fund in Ashland and Safe Haven Animal Rescue. Adam is also active in the local legal community by volunteering on the Cincinnati Bar Association’s Membership Services and Development Committee, the Admissions Committee, and on the Mock Trial Committee. In his spare time, Adam greatly enjoys spending time with his family on his their small farm in Batavia Township, Ohio.

Adam has both published articles and spoken on legal issues. He is a member of the Cincinnati Bar Association, the Ohio State Bar Association, and the American Bar Association.  He is also a recipient of Law & Politics magazine’s “Ohio SuperLawyer - Rising Star Award” and holds the highest ranking from Martindale-Hubbel's lawyer ranking service -- “AV - Preeminent.”